On Friday the 12th and Saturday 13th of July, Deliveroo drivers and union activists successfully protested in front of the Deliveroo Editions (also known as dark kitchens) in Swiss Cottage (North West London). These kitchens are small industrial units located in residential areas, which sometimes don´t even follow basic health regulations. Customers ordering from the app think that their food comes from high street restaurants, but in many cases it´s actually produced in these industrial kitchens. Drivers gather around this kitchen waiting for orders to appear on their phones, so they can pick and deliver them to the customers. The IWW has been organising among drivers in the Swiss Cottage Editions for the past months, demanding better pay and conditions from the company. 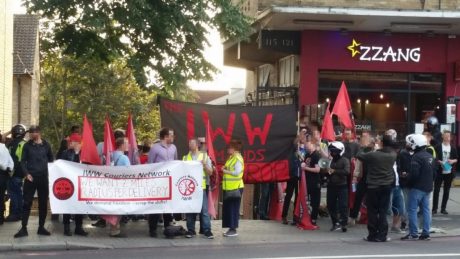 Drivers need at least £5 per drop, and £8 per double drop to make ends meet. Deliveroo must also treat them like human beings instead of machines. They have closed their on-site toilets, and prevented drivers getting together to socialise between drops. Imagine if your workplace closed the loos and locked the break room just to keep you working “more efficiently!”

On the 12th July, drivers joined their mainly cyclist colleagues of the IWGB in Nottingham and the IWW in Leeds shutting down their respective Editions. All 3 cities have been asking Deliveroo to end the recent bans that stop them from picking up deliveries from their respective kitchens. In Nottingham and Leeds the ban is targeting cyclists, while in London, motorcycles are the ones suffering the ban.

These are all attempts from Deliveroo to punish workers that are becoming organised.

The statement from Leeds said the following:

“The profit-driven reasoning behind Deliveroo’s decision is that cyclists are less ‘efficient’ than cars and scooters. This is a complete insult to cyclists who have worked tirelessly all year round facing dangerous traffic, icy roads, vicious storms and summer heat waves to build this company up to what it has become today.”

Despite their sacrifices, in London Deliveroo cynically used sustainability as an excuse to repress the workers, which in that area are almost entirely motorcycle drivers, with the exception of some cyclists that are mostly part time workers. They didn´t take any steps to become sustainable until the union appeared at their gates demanding better pay and conditions on the 25th and 26th of May. After the action, all the drivers were suddenly banned and Deliveroo started to push for drivers to switch to their own electric mopeds, which they rent to the drivers to make even more profit out of their work. Some of them had been picking up orders from the kitchen for years, but the only information they received from the company was an email that explained that they were automatically banned from their main source of income. In that email, Deliveroo blamed the council for the decision, but when the IWW contacted the local council they denied that the ban was their policy in any way.

After the ban went ahead, Deliveroo didn´t have enough non-moped drivers to handle all its deliveries, so had to give a considerable boost to attract enough cyclists from other areas. However, the month long fee boost to cyclists is also an attempt to sow division between the two groups. Cyclists coming to the area for the first time will be much less likely to join the drivers if they are, even if temporarily, the best paid Deliveroo cyclists in the whole of the UK.

Moreover, by banning drivers from the busiest pick up point they are dispersing them around dozens of restaurants. Drivers are not meeting in a single point as they used too, so communication and organisation becomes more difficult. Drivers don’t have enough orders from restaurants and they are really struggling to make ends meet.

In the three previous protests that we´ve held in front of the Editions, including on Friday the 12th, the company didn´t take long before removing the Editions from the app, which made it impossible for customers to order from the kitchen. 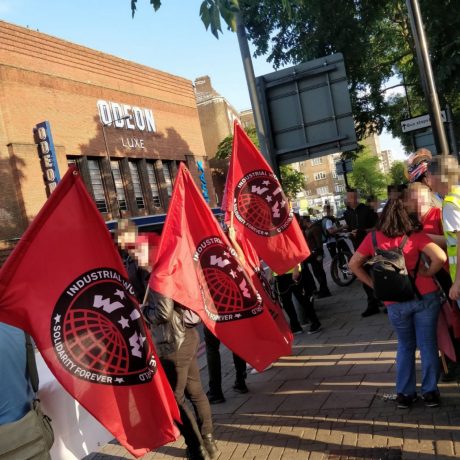 During these actions, we had a multilingual show of force were Brazilian, Iranian, Bengali and Pakistani drivers, among other migrant drivers from other nationalities, protesting next to each other demanding better pay and an end to the recently approved Motorcycle ban. These drivers mostly work in the Belsize area or came in solidarity to the protest from their usual areas in central London. After seeing that we wouldn´t go away, the company would shut down the kitchen completely and sending the kitchen workers home. Without orders to be picked up, no workers were tempted to break the efforts of their colleagues to shut the kitchen down.

However, at the mid-July actions, the company kept sending orders to cyclists with the intention of creating conflict between the cyclists picking up orders and the banned motorcycle drivers protesting at the gates. Not many cyclists entered the kitchen to take orders, but this tactic from the company was good to create a certain division between both groups of workers. The example of Leeds, where cyclists organised with the IWW to shut down the kitchen was very useful to show that actual enemy of the workers is management, not their own colleagues.

Not satisfied with creating division among the workforce, Deliveroo also called the police to suppress our protest. The police hadn’t paid much attention to our protests until then, but this time they decided to show us which side are they on. They sent 3 cars to suppress our protest, and threatened to remove us from the pavement to the other side of the road. Fortunately, we were determined and numerous enough and we managed to stay in front of the kitchen until Deliveroo closed it completely.

A driver who has been in all of the previous protests said the following about the incidents on Saturday:

“We drivers knew that on Saturday 13th Deliveroo was going to close the kitchen at 7pm [as soon as the action started]. After the protest on the day before, they were waiting for another action on Saturday. But some cyclists wanted to keep working, and told the manager they would resist against our shutdown. The manager, deliberately allowed them to work, which caused all the confusion, arguments and troubles!”

However, both union activists and drivers agree that the mid-July strikes managed to hurt the pockets of the company, resisted their union busting strategies and gathered a migrant and multilingual workforce to militantly fight against the imposed poverty of Deliveroo. The company has many kitchens around London, and we are aware that closing just one is not as effective as we would like it to be, but we are setting an example for the rest of the city and we are planning to expand very soon.

If you are a Deliveroo or UberEats driver working in London, or are interested in volunteering for the campaign, please do not hesitate to get in touch. Work conditions can change, but only when we work together.

If you are a driver/rider and would like to join the union, please go to https://iww.org.uk/join/.