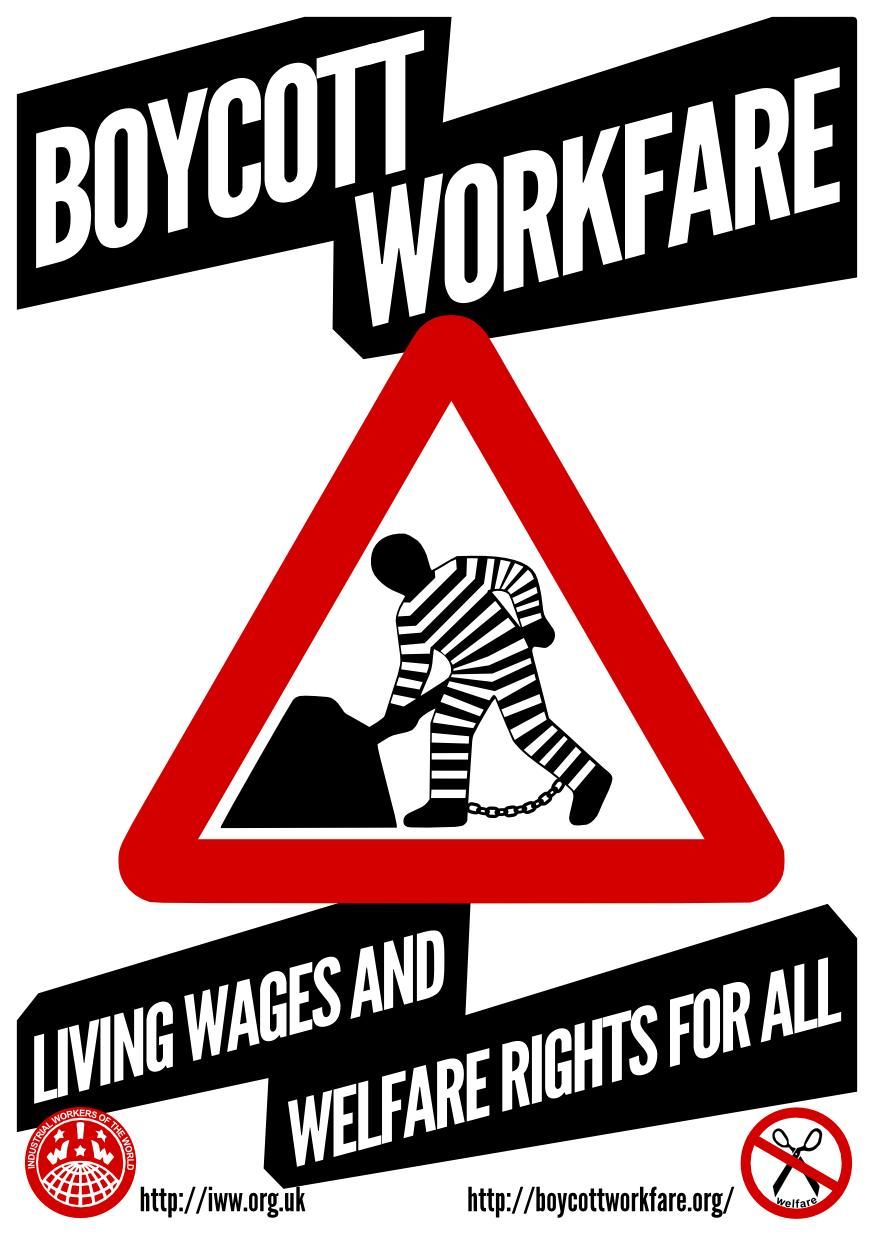 On Saturday, 5th April, members of Liverpool IWW will be taking part in the ‘workfare walk of shame’ which we have organised. We will be highlighting the intense exploitation of workers under various workfare schemes, as well as the pressure workfare puts on the pay and conditions of all working class people. We will also be publicising the IWW, and asking people to join our branch-in-formation.

Workfare is a social crime, which compels unemployed people to work for free or risk the roof over their head and even starvation. Time that could otherwise be spent on looking for paid work or even – dare we say – relaxing, is taken up by doing work that someone was once paid for. With no currently existing way of defending themselves, workfare staff can be ‘sacked’ for the slightest thing – such as lateness or breaking some other minor rule. For bosses, this makes them the perfect ’employees’ in many respects.

Instead of paying a worker far less than the value of their labour to the employer (as is normal), they are paying them nothing. In other words, the worker is effectively being forced to donate their labour power to a business, a charity or a local council. They are then used as a stick to beat the rest of the workforce with – i.e. the stated or unstated threat that ‘if you don’t pull your socks up we can get someone to do your job for nothing’. In this way, the rate of exploitation is increased for staff across the board. The new ‘Community Work Placements‘ are the worst form of this so far. The unemployed are due to be sentenced to 780 hours – twice the maximum ‘community service’ sentence for those who fall foul of the law!

One strategy for defending ourselves is to call for a consumer boycott of workfare exploiters, as the Boycott Workfare team and welfare blogger Johnny Void have done. By showing up at premises, making some noise and handing out propaganda, we can worry managers a little bit. By spreading that story online using social networking, we can worry them a whole lot more. This strategy has had many successes, with businesses from 99p Stores to Sainsbury’s announcing their withdrawal, along with charities such as Cancer Research and Scope. If an injury to one is an injury to all, then each of these is a victory for the entire working class.

IWW actions typically come from the inside of an organisation – where workers are organising themselves. Liverpool IWW are working towards organising unemployed people – especially those on workfare. But while we are a branch in formation, we will take the fight to the bosses in every way we can. The abolition of workfare is in the interests of all working class people.

Meet at Next to Nowhere, 96 Bold Street, Liverpool, on Saturday, 5th April at 11am. Bring banners, placards, and the noise!