Say no to disability discrimination in TEFL:

The IWW stands with Mike

Mike came to the IWW’s TEFL Workers’ Union after he felt forced to leave his job at United World School of English after 20 years of working there.  At issue was the fact that his employer had failed to act in his best interest despite knowing about his mental health difficulties.  Just the opposite in fact: United World was piling on the pressure, refusing to engage with Mike’s requests for reasonable adjustments, and calling him into a succession of stressful and unnecessary closed-door meetings with management.

Resigning from the job I’d been doing for 20 years was extremely difficult for me, but I was suffering so terribly from the conduct and demands of my employer that I felt that if I didn’t resign, my mental health would suffer to such a degree that it may have not been repairable.

Things got particularly bad in the summer of 2018. I was already struggling because we were so busy, and then I was put under extra pressure. For example, without consultation, I was given lessons that I couldn’t teach because of childcare commitments (that the school was aware of), and I was taken off other lessons with no notice. I expressed my distress and anxiety to the managers and they made a couple of changes that lasted about 12 weeks.

To make matters worse, at the end of that summer, I was told that I had to do the Delta* because during the previous inspection the inspectors told the school that I had to have the Delta in order for the school to pass the next accreditation inspection. This put a huge amount of weight on my shoulders and made things even more stressful for me, but I managed to pass Module 1 first time.

I tried to do Module 3 of the Delta twice in 2019 but had to defer it both times because I couldn’t cope mentally: I would often just shut down, or I would spend hours looking at the textbooks then I would realise that nothing had gone in, or I simply wasn’t able to focus on any of my studies at all. I informed the management each time and they were fine with me deferring. At the beginning of 2020 (pre-covid in the UK), I told my DOS that I still wasn’t ready. Also, by this time I had realised that it wasn’t true that I had to have the Delta and that a degree, or equivalent, would suffice.

Last October, The same DOS asked me to do two overlapping modules of the Delta – completing by summer 2021 – when I’d very recently explained to her that I couldn’t cope with it – this had a profound impact on me: I had to start taking medication, since, for the first time in my life, I had started entertaining thoughts of an especially morbid nature. I’ve needed to increase the dosage of my medication over the last 6/7 months and I am currently on the maximum dose of my particular anti-depressant. In addition, I constantly need to use CBT techniques and meditation, along with measured physical exercise, just to get through the day.

I was told a number of times that I would lose my job or that the school would most likely have to close if I didn’t have the Delta. Each time this happened, I found myself shutting down a little more – regarding the school closing, it was untrue, but I really started doubting myself, questioning whether I had massively misunderstood the industry’s qualification requirements. And regarding losing my job, I believed it would happen. This took me to a place I had never been mentally – I still have not recovered from this.

Through all this, between the end of the summer 2020 and March 2021, it was continually necessary for me to explain my symptoms of anxiety and depression. Further to this, my doctor was asked to prepare a report on my mental health, which asked many questions that I felt were not necessary. My doctor explained very specifically to the school that the studying for the Delta would “have a serious and rapid detrimental effect on the progress we are making” and a worsening of my symptoms. Despite this, I was still told by the owner of the school that I had to do the Delta or I would lose my position. On the Monday of the week I resigned in March, I was told again (by my DOS) that the Delta was “the easiest option”. That was the final nail.

The IWW has been fantastic – not only has everyone there supported me all the way and given me the strength to carry on, but they’ve also made it possible for me to make a stand – and I really hope that this might go some way towards helping others with mental health issues.

*A Delta is a higher-level English teaching qualification, usually undertaken by those who want to become teacher trainers, managers, or teach in a uni setting. The British Council, which oversees the English language teaching industry, requires that all teachers have the lower-level qualification, a Celta.  But a Delta is not a requirement to work in a British Council certified school.

The IWW would like to express our support for Mike and thank him for sharing his story. These are never easy issues and it takes courage and resolve both to challenge them legally and to speak publicly about them.

Work in ELT? Problems at work? The IWW has got your back. Email tefl [at] iww [dot] org [dot] uk to speak to a union rep for guidance and support. 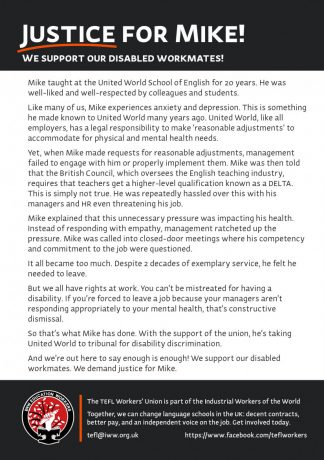