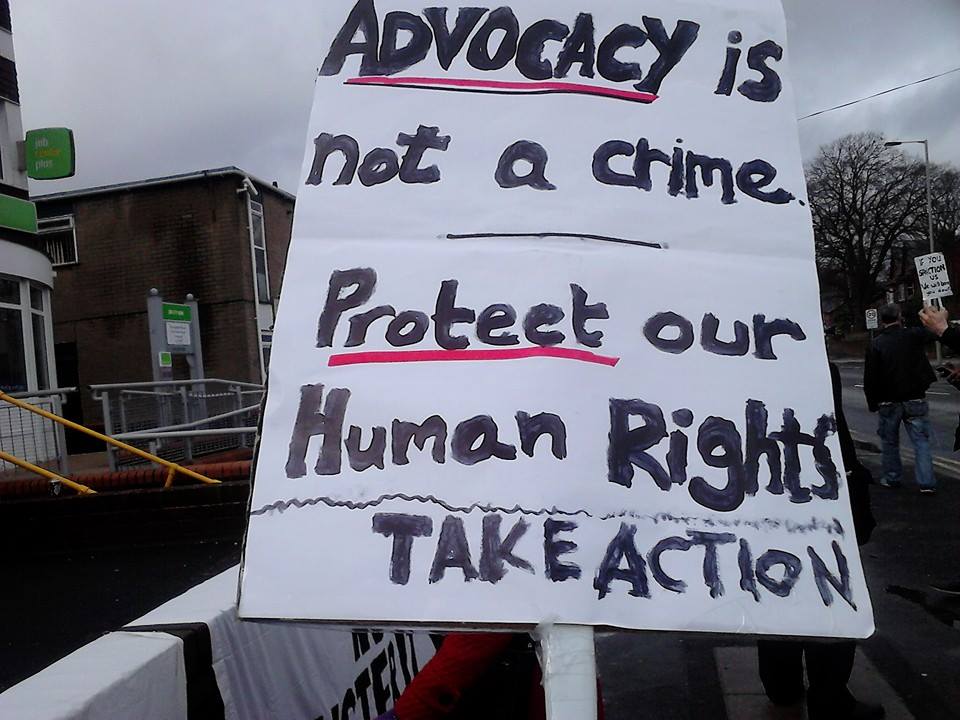 Members of Liverpool IWW joined around a dozen activists, including people from the benefits advice group Reclaim, outside West Derby job centre on Eaton Road this lunchtime. This was part of a national day of action in solidarity with Scottish Unemployed Workers Network activist Tony Cox. Tony was arrested on 29th January after Arbroath job centre management called police to stop him representing a vulnerable jobseeker. We protested to drive home the message that ‘advocacy is not a crime’, and aiming to build towards smashing sanctions against unemployed workers.

The G4S ‘security guards’ immediately called the cops when we showed up with our leaflets, placards and banners, which was pretty easy as the police station is right next door! A group of quite a few police went into the job centre and spoke to G4S employees for some time, before coming out and telling us they had no problem with us protesting (neither could they, it’s supposed to be our right!), but asking us to remove our banners from the job centre wall. We refused, as the job centre is funded by tax payers – i.e. all of us – so should be considered public property. The cops didn’t want to push it, and they went back to their station.

Perhaps one reason for their decision to leave us in peace was the fact that the demo was getting MASSIVE public support. Not only were job centre users (if anyone actually ‘uses’ a job centre these days) pleased to get info on their rights, but there was an absolute racket from the number of people passing in cars beeping their horns and shouting their support. Clearly, we’ve now reached a stage where large numbers of working class people are very aware of the horrific damage done by the government’s sanctions regime, and are glad to see people fighting back.

We will be organising more with our friends in Reclaim over the next few months, as we aim to build resistance amongst the most precarious sections of the local working class.