By Fighting we Make Things Better 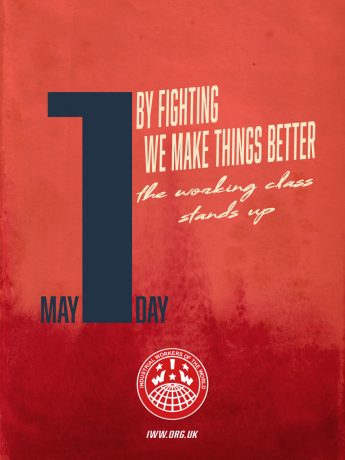 Through the course of the health crisis, the worst ills of our society have been revealed with unprecedented severity. Social and economic inequalities were deepened with such virulence that they have revealed the worst face of the current economic system in which we live.

We have been able to see, despite the government’s propaganda, that the social measures to protect the working class were and continue to be insufficient. From the first moments of the lockdown last year, when the economy came to a halt, we saw how thousands of people lost their precarious jobs, could not even access the underground economy on which thousands of families subsist, and were forced to choose between a roof over their head, their health, and putting food on the table. Combined with the rising prices of basic goods and foodstuffs as a consequence of Brexit, thousands of working families have been put on the ropes.

Faced with this situation, neighborhood support networks like mutual-aid groups and unions were activated and worked together to supply basic needs. Once again, mutual-aid and solidarity provided much more effective solutions on the part of the people. Helping us recognize, once again, that working class solidarity is the only way to move forward.

In the workplaces, on the other hand, the endless greed of capitalists was once again evident. Despite the government’s attempt to save jobs through The Furlough scheme, we have had to fight against the various abuses and frauds of many companies including workers who were required to work (even from home) despite being on Furlough, coercion, and pressure to leave their jobs during Furlough, if not outright dismissals without any shame whatsoever.

We can say that the health crisis has served to accelerate and start an economic crisis that was already on the horizon. Thus, large companies and multinationals of all kinds have accelerated mass redundancies, destroying jobs and accelerating the deindustrialization of our economy. On the other hand, in other industries, subcontracting is increasing, applying worse conditions to the workforce, with many unscrupulous bosses employing “fire and rehire” tactics to drive down wages and conditions.

The IWW wants to encourage a new wave of organising and industrial action to restore dignity to the working class. We demand, as workers, that the role of unions be one that defends real wage increases, improves the purchasing power of the people, and defends real equality in companies. We do not want to sign agreements, make concessions, or meet employers halfway. We reject the fable that “We are all in this together” and will not be forced to pat the price for profits any longer.

To do this, we want workers to organise and fight to win greater rights and greater dignity. For that, we need to see more workers organise together and take more militant action in their workplace, we need to see labour organising extend beyond the workplace with more mass strikes and mobilizations, we need to see less mediation and reject the right of bosses to rule for it is only by fighting that we make things better. We firmly believe that the grassroots direct action of those of us in the IWW represents the best values of humanity, mutual support and solidarity and we ask you to join us in our fight, your fight.

The IWW is a democratic, grassroots, direct action union that believes in putting the tools of workplace organising firmly where they belong: in the hands of the workers.

Join us, get stuck in and bring the fight to your bosses today IWW.org.uk/join