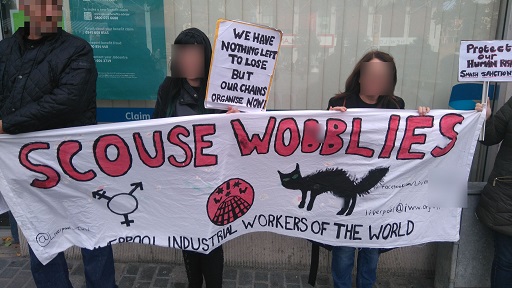 This afternoon, members and supporters of Liverpool IWW held an information picket outside the town centre job centre, on Williamson Square. We are one of several IWW groups and other activist organisations holding demonstrations at job centres this week. Scottish Unemployed Workers Network called for solidarity with claimant advocate Tony Cox, who faces court in Forfar tomorrow on the ludicrous charges of threatening behaviour, refusing to give his name and address and resisting arrest. He was arrested at an Arbroath job centre last January, whilst representing a highly vulnerable unemployed woman. 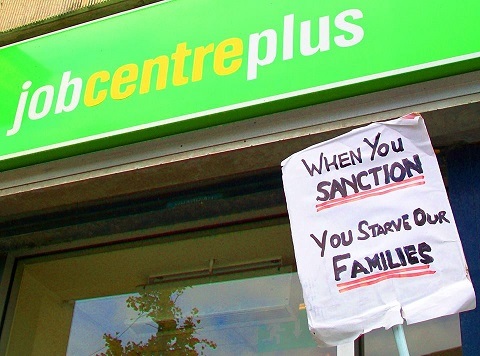 “We believe that this case highlights the climate of fear that is evident within many job centres, but that it is not only benefit claimants that are treated with contempt. Welfare advisors are also being subjected to bullying and intimidation, as in the recent case of Mike Vallance at High Riggs Job Centre, when they attempt to represent, often highly vulnerable, benefit claimants. The SUWN will resist any and all attempts to curb the rights of welfare and citizen advocates to represent the unemployed, and we ask you to join us in our fight to ensure that ADVOCACY IS NOT A CRIME.”

In Liverpool today, we distributed info provided by Edinburgh Coalition Against Poverty, backing up with legal statements the fact that ‘advocacy is not a crime’. Claimants visiting the job centre took our advice enthusiastically, and were generally pleased that someone was taking a stand against the Department for Work and Pensions, and the bullying regime inside job centres. Our social networking presence also got a number of likes and follows during the picket.

In fact, the response was so positive that we will soon begin a regular series of job centre info distribution pickets, offering advice, encouragement and solidarity to claimants – who represent some of the most vulnerable elements of the working class.