19/09/2018: Couriers of the IWW Couriers Network recently uncovered shameful discrimination against Sex Workers contained within the onboarding training that Deliveroo mandates couriers must complete to begin working for the company. Within the contract Deliveroo couriers were instructed to not deliver to Sex Workers in a disgraceful display of discrimination.

Our members wholeheartedly rejected this blatant attempt to pit precarious workers against each other and the IWW Couriers Network worked with the United Voices of the World Trade Union to demand the company remove the clause.  Deliveroo accepted that the clause was unwarranted and have removed it but fell short of issuing a full apology to both couriers and Sex Workers.  The IWW Couriers network and the UVW have released the joint statement below calling on Deliveroo to publicly apologise and back Sex Workers by stating their support for the full decriminalisation of Sex Work.

We encourage all IWW members – whether couriers or not, along with the wider public to put pressure on Deliveroo to take the action demanded in the release below. You can contact them by emailing: support [at] deliveroo [dot] co [dot] uk or contacting them via social media.

We were shocked and appalled to recently discover that the Deliveroo ‘onboarding’ training documentation contained the following clause, which we believe to be discriminatory, unworkable and without adequate reason, and directly contributing to the stigmatization of sex workers: 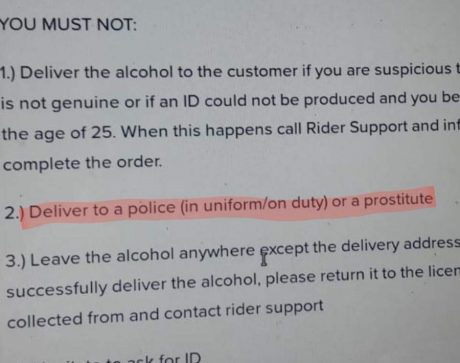 After contact from the Unions, Deliveroo distanced themselves from the ‘rule’ stating that it was part of “training material” and was included as a result of a misunderstanding of the of the law.

The IWW and UVW back the complete decriminalisation of sex work and stand with sex workers who are criminalised, stigmatized and demonized. Criminalisation makes sex work dangerous and the stigma about prostitution in particular contributes to sex workers experiencing disproportionate rates of gendered violence and harm, including the highest death rates of workers in the world.

The IWW Couriers Network and the UVW welcome Deliveroo’s removal of the discriminatory policy within their training material, however we call on Deliveroo to go further to address the injustice that this ‘oversight’ has caused by:

“It’s heartening to see Deliveroo couriers taking a stand against bigotry and I’m glad to see that Deliveroo have now removed the clause. Sex workers are already hugely stigmatised and discrimination like this further separates us from the rest of society. Being barred by Deliveroo might seem like a small inconvenience, but the idea that we’re not worthy of rights leads to us being considered disposable and deserving of hate and violence. A big thank you to the couriers for standing in solidarity with us. We’ve got your backs too!”

Cee, a London based sex worker

“Stating that Deliveroo couriers are not allowed to deliver alcohol to sex workers is nothing less than discrimination and contributes to the continued stigmatisation of sex workers. This clause does not apply to any other types of worker (apart from the Police) – despite consumption of alcohol being much more dangerous in other types of work. It seems to me that Deliveroo have simply put in this clause because they have unwittingly absorbed a stigma to sex workers and they want to keep their image ‘clean’. Couriers in our union are standing up and offering solidarity and support to sex workers who are affected by this ridiculous clause.”

T, a Bristol based Deliveroo courier

United Voices of the World