Members of the Garment Workers Union in Bangladesh owed wages and benefits started an indefinite siege of the factory owner’s house from the 30th August. A hunger march had been held. This started the United against the Dragon campaign!

The Garment workers are linked to the International Confederation of Labour which links revolutionary unions like the CNT in Spain, USI in Italy, FORA in Argentina and the IWW.

Solidarity pickets have been held outside chain stores with contracts with the Dragon Sweater owners in Dhaka. 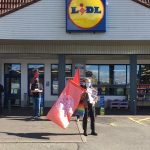 Clydeside IWW members #UnitedAgainstTheDragon at the Lidl in Maryhill, Glasgow

The stench of bad publicity has caused Primark, Next, Zara & New Yorker to drop the label. ASDA have denied any current link. LIDL refuse to answer.

A month long campaign  kicked off in Derry, Dublin and other IWW groups in Ireland.

On the 23rd September Clydeside IWW members picketed LIDL in Govanhill. An impromptu picket was held at the same location a week later by visiting Tyneside radicals.

On the 6th September, LIDL Maryhill was picketed, as was Partick Lidl on the 12th. The same day as North Ayrshire members picketed Kilmarnock, and Dumfries IWW members did likewise on the 13th. Along with fellow workers and comrades around the world, Clydeside IWW are United against the Dragon.

Additional messages of support and solidarity can be sent to the Garment Workers Trade Union Center at gwtucint [at] gmail [dot] com.

Despite the Covid-19 restrictions, this campaign involved IWW members in a wide-range of solidarity activities – banner making, social media promotion, and the pickets themselves. And it showed the power of global solidarity by connecting our branch to fellow workers in Ireland and comrades around the world.

A version of this article was first published on the IWW Scotland blog.