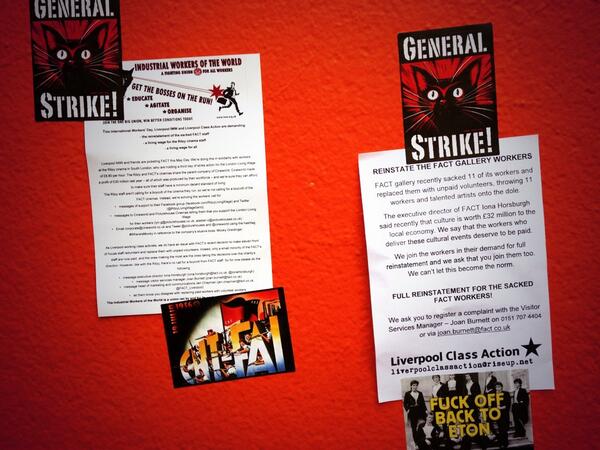 Liverpool IWW and Class Action held a successful picket of FACT yesterday afternoon. We took the May Day action in solidarity with Picturehouse cinema workers striking for a London Living Wage, and to raise awareness of FACT replacing 11 front of house workers with volunteers.

After a slowish start, around fifty people eventually showed up, with many handing out our leaflets to cinema-goers arriving to watch Spiderman 2 or to eat in the Leaf cafe. This was a great turnout for an event called at three days’ notice, especially when more than half were ‘new faces’ drawn by the FACT controversy, or concerns about workers’  tumbling living standards generally. Promisingly, it was without doubt the youngest, most gender-balanced May Day event in Liverpool for many, many years.

FACT had been given notice of our plans, and had a police community support officer inside when we arrived. He didn’t make any intervention, but his very presence was a preposterous reaction from a ‘charity’ who clearly believe they have reason to be afraid. Visitor services manager Joan Burnett was also dispatched to talk with the public, and hand out yet more cleverly-worded, deceitful propaganda.

No Joan, FACT have not “sacked 11 full time staff”, but this ‘quote’ is one you have completely made up! The nearest that has been said is Class Action’s entirely accurate statement that FACT “recently made 11 workers redundant and replaced them with unpaid volunteers”. They weren’t “full time”, because, in the words of an email from communications officer Jen Chapman to Nerve magazine after their statement, “Our gallery assistants have always been on zero hours contracts” (yes, she said that like it was a good thing).

Anyway, with tactics like this, FACT’s well paid top floor managers are clearly on the run. Keep up the pressure:

The Ritzy workers have asked for the following solidarity action from supporters: