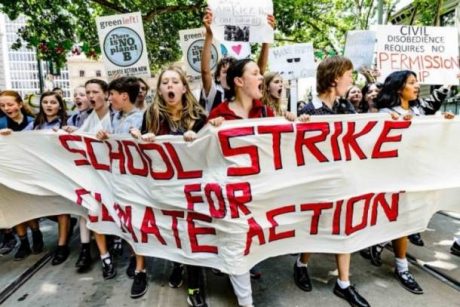 The London IWW would like to extend our solidarity to the school strikes taking place today around the globe by courageous young people fighting for action on climate change. This is part of a growing movement with the next strike planned for March 15th

These strike show the power of direct action. These young people are not relying on politicians or charities, nor expecting business to ‘do the right thing’. They are taking power into their own hands and should be an inspiration to the rest of us.

It’s our communities which bear the brunt of environmental degradation and we’re on the front line when it comes to the industrial processes which fuel climate change. We struggle when food prices rise. The same companies that produce ecosystem-destroying pesticides expose their workers to harmful levels of toxins. We suffer the most as a result of policies that prioritise private industry over public transport, releasing untold amounts carbon into the atmosphere in the process.

These strikes will put pressure on governments to change, but this isn’t enough. The strikes need to spread to the very industries that are destroying our environment.

We need to take inspiration from these courageous students by going on strike ourselves and demand that our employers act to halt catastrophic climate change. We need not only green jobs but a dramatic retooling of the entire economy that places human need and sustainability as the core value upon which production is organised.

We should take inspiration from the Australian green bans, in which a radical Australian construction union refused to undertake building projects that damaged vital green spaces. The Lucas Aerospace workers who, when faced with redundancies, devised their own business plan and pressured their employer to switch from military manufacturing to socially useful production are another model to which we should aspire.

The students are leading the way and their message is clear: we need to tackle climate change now. But we won’t get it by voting. We won’t get it through consumer choices. We’ll get it by taking action and standing in solidarity with one another.

For a better world