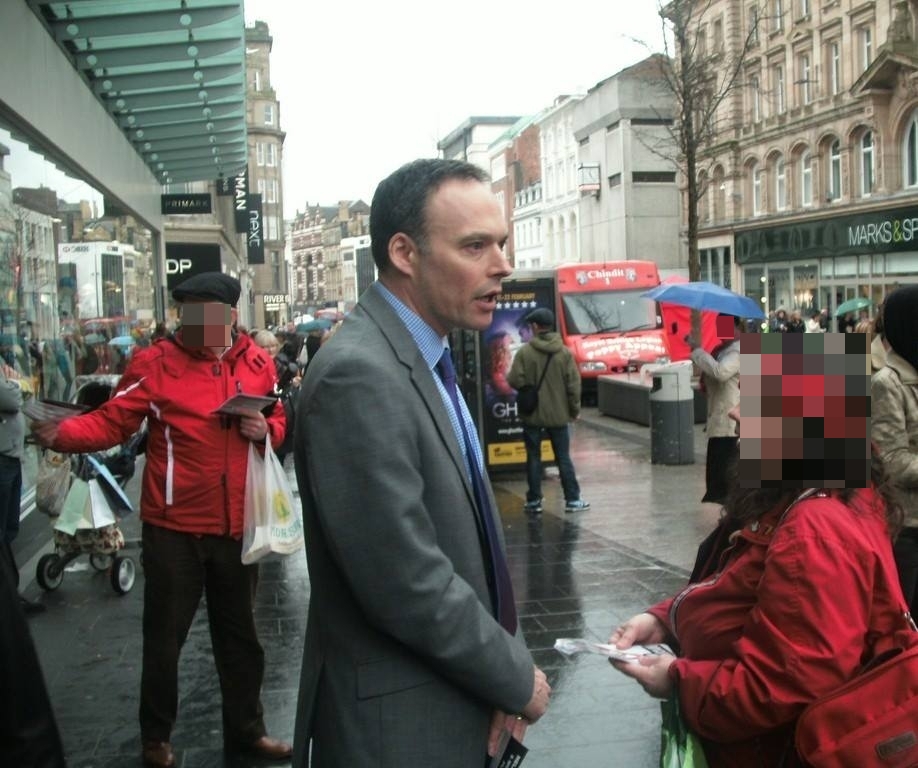 Liverpool Primark’s manager denied he uses workfare, but his company does

This lunchtime saw the first event called by Liverpool IWW since 1920, as members and about twenty other activists took part in an event as part of the national Boycott Workfare week of action. On a ‘walk of shame’ which took us from high profile chain to high profile chain, we demanded answers of store managers, offered support to the workers, and spoke with customers. Over seven hundred leaflets were distributed in around an hour and a half!

As well as people who had taken part in the Solidarity Federation-organised workfare pickets of a couple of years back, the action drew support from the wider unaffiliated Liverpool left, as well as some who heard about it from social networking websites. It seemed to tap into the urgent need for a new form of working class action in the city and the Merseyside region.

Our first stop was the Primark on Church Street. The bargain clothes company saw its profits surge by 44% last year, and part of the explanation for this must be that ever more financially squeezed shoppers are turning to them for their essentials. But another aspect is that Primark pays its workers – subcontracted overseas and around minimum wage in the UK – a tiny fraction of their worth to the business. The company’s use of workfare has increased this rate of exploitation. The manager denied that any staff in his store were on workfare. When told about the situation in Primark as a whole, he pleaded ignorance, and falsely claimed that workfare is nothing to do with the Liverpool outlet.

M&S is right over the road. The company seems to have lost some of its clothing sales to cheaper rivals like Primark in recent years, as well as online retail. But the bosses have tried to steady profitability by taking advantage of what their own website calls “an entire generation missing out on their chance to show their working potential”, by recruiting them to work for free. We were immediately told we couldn’t leaflet inside, but the manager was called to speak with us. She told us that M&S operate a scheme through the Prince’s Trust, and repeatedly lied that participants are paid the same as permanent staff. In reality, young workers on the scheme are enlisted for “unpaid work experience placement in an M&S store”.

Over on the corner of Lord Street, McDonald’s needs no introduction. Regularly wringing out nearly a dollar in profit per person on the planet each year, its growth and ‘McJob’ employment model is symbolic of American capitalism. While an estimated 90% of its UK workforce are on zero hour contracts, it has not been shy in exploiting workfare either. No surprise then that there have been a number of protests against their participation in the government scheme across the country. A large group of us went right in to the restaurant, and gave out a lot of leaflets.

By the time we reached Debenhams, almost all the literature had been handed out, so we got rid of what we had. It was noticeable that a higher proportion of Debenhams customers were unaware of workfare.

Apart from a couple of negative comments, members of the public broadly sympathised and told stories about how austerity and precarious employment has affected their own lives, or the lives of people they cared about.

Many activists told us they enjoyed the action, and hinted they’d be up for more over the coming weeks and months. If we’re to succeed, it is important to embarrass the exploiters, by providing would-be customers with information about the disgusting workfare system, and how it affects them. We can amplify this by writing articles online, sharing photos, and clogging up the companies’ social networks.

But as the IWW, we also have a bigger aim – to organise the most exploited sections of the working class, alongside their slightly better off counterparts, into ‘one big union’ which can resist the capitalists and their governments. From this very good beginning, it must be onwards and upwards for Liverpool IWW.

If you can let us know the secrets of any local workfare ‘providers’, or want to join Liverpool IWW, please email liverpool(AT)iww.org.uk, or get in touch via our Facebook page.