14th August 2018: Members of the Welsh Branch of the Industrial Workers of the World, a grass roots union for all workers, will protest this week outside Admiral’s Cardiff HQ in solidarity with Spanish workers who don’t get a fair deal from the international insurance giant.

Workers at Admiral Group in Spain, where the company operates the Balumba insurance brand and plans to locate its post-Brexit EU HQ, say they are not getting a fair deal from the company, Wales’ only FTSE-100 listed company.

Members of the Cardiff branch of the IWW are working with Spanish union, Sindicato Andaluz de Trabajadores, to raise the case of workers in Seville, who have been made redundant unfairly and who face cuts to their commission rates despite Admiral Group’s booming balance sheet.

IWW leafleted staff outside the building, in Greyfriars Road, on Monday and will demonstrate again at Admiral’s HQ in the city on Friday at 4.30pm.

The Spanish union says redundancies have created an atmosphere of fear among employees who have helped Admiral Group to 2017 results that included profits before tax at a record £405 million, and an 11% increase in shareholder dividends.

“Sandra has worked for Admiral for 10 years and has health issues that make work difficult – difficulties exacerbated by working at Admiral – and they have now made her redundant! During her time with the company she has worked in five different departments, doing work she was still very capable of: Reception, Finance, Marketing, Verifications and Human Resources. She was recently sent flowers by the Human Resources department as commendation for her work. But now the company claims that it can find no work for Sandra in any of these areas despite its continued growth!”

“Admiral is doing the international name of Wales no favours by treating Spanish employees in this piratical fashion. This hugely successful business is very generous with its shareholders but disposes of loyal employees with no regard to natural justice or fairness – no amount of worker share bonuses are of any use to employees with no job security.

“Companies operate across international boundaries these days and unions must do the same if they are to protect workers’ rights. The IWW’s motto is ‘an injury to one is an injury to all’ and we stand with Sandra and her colleagues.

“We think Admiral’s employees and customers should know about her case and we’re confident that they’ll back her by asking Admiral to treat all its employees with fairness and dignity. The IWW urges its members and supporters to show their support for this demonstration and to back us in person, by letting Admiral know online what you think of the way they treat their staff. “ 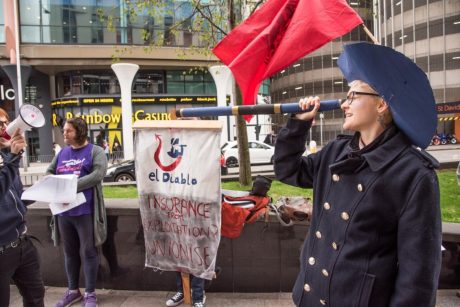