Teachers at Delfin English School in London will be walking away from their jobs with an enhanced redundancy after a vocal and energetic campaign that spread to cities around the UK.

The entire teaching staff at Delfin was made redundant last year just five days before Christmas. The TEFL Workers’ Union, which represents staff at the school, maintains the redundancy process failed to meet the required legal standard.  In response, the union undertook a series of pickets alongside a social media campaign.

Choosing to focus largely on Delfin’s business partners, there was a national day of protest targeting a language school chain from whom Delfin is renting teaching space. Protests were also directed towards a staffing agency which began providing teachers to Delfin immediately after the redundancies.

Delfin, which declared insolvency during the subsequent negotiations, failed to send someone from the Dublin head office to London to discuss the matter.

“The Delfin teachers fought a hard campaign and were lucky to be able to count on the support of the London EFL community and IWW branches around the UK. As a result, they secured an enhanced redundancy package – something that’s virtually unheard of in the language teaching industry.”

In a further act of solidarity – and one which stands in stark contrast to that of their employer – Delfin teachers secured the additional payment for a further two teachers who had left the school before formal redundancies were announced.

Teachers at Delfin joined the TEFL Workers’ Union in 2018 making it one of the few unionised language schools in London.  Over the course of the following year and half, teachers won significant contract improvements including paid sick days, paid meetings and trainings, and the removal of unlawful clauses in their contracts.

A statement put out by the union had this to say,

“This victory shows how badly the language teaching industry needs a union. For too long, workers in language schools have had to deal with employers that pay little heed to law and have even less concern for the welfare of their staff. But when we stand together, real gains can be made.” 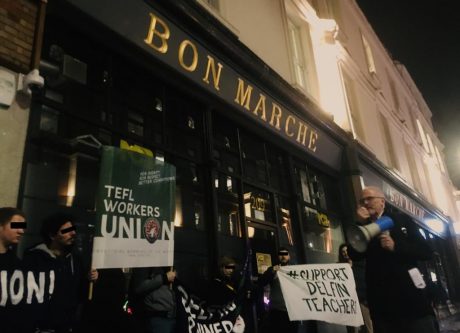