“None so fitted to break the chains as those who wear them, none so well equipped to decide what is a fetter”. James Connolly on Womens’ Rights, The Reconquest of Ireland.

The Industrial Workers of the World in Ireland welcomes and celebrates the recent democratic decision to repeal the 8th Amendment which had banned abortion in Ireland since 1983. This is a huge step forward brought about by those who shared their experiences of previous ‘Irish solutions to Irish problems’, those who campaigned including Irish members of IWW from North and South who were active at street stalls, on social media, leafletting for the successful Together for Yes campaign, and knocking on doors.

However, those who finally made this possible were the thousands who voted Yes, in particular those who did not have the answer to all their own doubts, but felt that women and anyone who can get pregnant should be the ones to choose for themselves. The Irish people showed an understanding of the statement, An Injury to One is an Injury to All.

The influence and activity of American right-wing groups on our streets was an obnoxious and illustrative feature of this campaign. If anyone doubted the ability of right-wing money to mobilise, build hatred, misinformation and fear to promote what can only be described as contempt for women, let them study the disgraceful intervention in this campaign. This will no doubt continue when steps are taken to make the will of the people a reality.

We await further attempts to preserve power from the right wing. We also await, less confidently, the marshalling of goodwill towards children expressed in some quarters, as they channel their energies into improving the lives of children in areas such as education, poverty, housing, health, social services, and leisure. We will not hold our breath.

The next stage in this story is the North. While similarities with the Repeal the 8th campaign will be instructive, the importance of mass mobilisation will be even greater here, given the rabid nature of the DUP’s response to reproductive rights among other issues, and the lack of will among other elected representatives to deal with it .

We join with those campaigning to remove this injustice in the North of Ireland and will work with others of good will with similar aims. Those parachuted into Dublin from the US may well have their tickets for Belfast, so it is vital that support be given from across the island to the continuing campaign in the North. IWW members were marching in today’s procession in Belfast under the banner Abortion Rights are Workers Rights. We call on our fellow workers across the world to support this campaign. 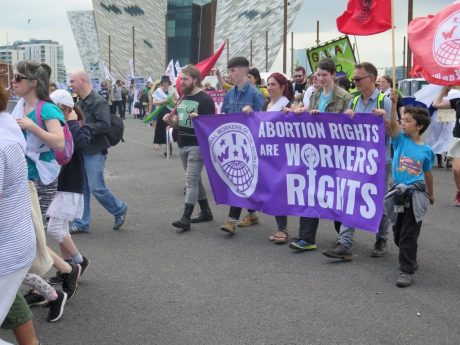 Fellow workers unfamiliar with the social history of women’s rights in Ireland might watch like to watch this documentary: https://www.youtube.com/watch?reload=9&time_continue=457&v=hB7Ifu4nl0U