The IWW Couriers Network recently sent representatives from the Network to the first International summit in the world of couriers self-organised collectives and unions working with couriers!

The summit, organised by AlterSummit and the Transnational Social Strike saw riders and their representatives from as far afield as Finland and the United States join together in Brussels for two days of discussions, sharing tactics, strategies and lessons from their local struggles in order to build co-operation and collaboration across borders in seeking to resist the companies who themselves span continents.

One of the IWW Couriers Network who attended the event tells us of the scale of groups involved and the general mood:

It was very well organised, with live translation into English, French, Spanish and German. The vast majority of courier groups present were self-organised collectives, independent of union influence. Other syndicalist unions (alongside the IWW) were present, notably Deliverunion (partnered with the German, FAU) and Syndicom. The Germans and Austrians were partnered with larger unions, along with Norwegian riders. Debate between couriers was held horizontally and was very good natured. Considering the fact that it was taking place in 4 languages simultaneously, the event was very effective in communicating shared goals! 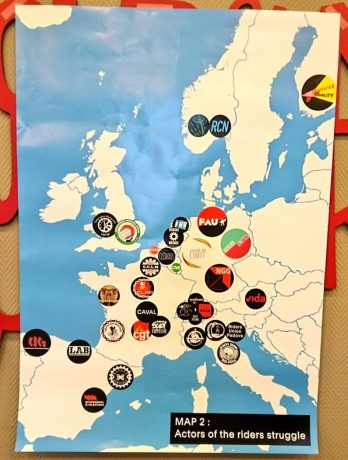 Map detailing all organisations from across Europe attending the summit

Sessions were held across the two days focusing variously on introducing the respective struggles and tactics employed by riders and their unions in each country, exploring common themes and demands across borders and the potential to establish transnational support structures to help riders organising in their respective countries. Following sessions to discuss the questions, the entire assembly reconvened to vote on the formation on the formation of an international group to build couriers organising potential across the world built around the following structure: 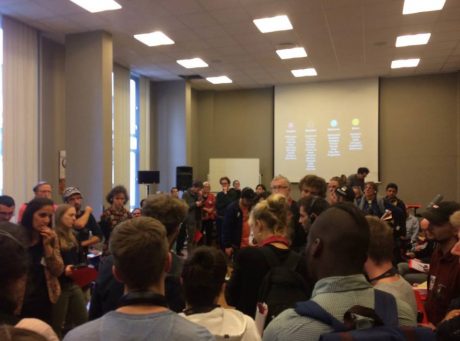 The details of how the Federation will be run on a day to day level, along with its charter and ethos (which future organisations seeking to join would need to abide by) were left for future discussions to be held after the summit, but to close a series of key demands were agreed from all present, which member organisations would seek to secure from their employers:

Following the close of the summit, a mass ride of over 1000 riders took place across the city of Brussels – a great way to display the collective power of couriers across the globe!! The IWW Couriers Network’s involvement in the summit was another great example of the continuing good work that the Network is taking in building working class power – long may it continue!