The TEFL Workers’ Union, part of the lndustrial Workers of the World (IWW) trade union, is claiming victory after scores of employees at the large multinational English School, EF Education First, have been awarded back pay.

The back payment stems from the fact that EF only paid staff at 80% holiday pay during the five bank holidays during the furlough period.

gov.uk states that holiday pay during the furlough period should be based on “usual earnings”.  The Advisory, Conciliation and Arbitration Service (ACAS) further clarifies that “Furloughed workers must get their usual pay in full, for any holiday they take.”

A majority of teachers at the London branch of the school wrote a letter to the company raising the issue in September.  Senior managers only took action after a member of staff filed for early conciliation with ACAS, a necessary first step before going to employment tribunal.

The case highlights many of the systemic issues in the Teaching English as a Foreign Language (TEFL) industry which is traditionally non-unionised and largely free from external oversight or government regulation.

Anna Clark, an organiser with the TEFL Workers’ Union, had this to say:

“This is a huge victory for the staff at EF who were shamefully robbed of their wages by an employer who was happy to make use of government support during the COVID crisis. It also sends a clear message to the industry: You can no longer run roughshod over your employees.”

In an email to staff regarding the matter, EF claimed it was just a matter of “best practices” without acknowledging the ongoing legal processes that have brought the company to this point.  In the email, staff were told, “We hope that this is good news just before Christmas!”

A teacher previously employed at the London branch, but still entitled to the back payment, responded:

“Good news?  As if they did this out the goodness of their hearts!  I’ve never felt so patronised in my life.  We raised this issue months ago.  It’s only because we were willing to take the matter to an employment tribunal that our bosses finally changed course.”

A former Manchester EF teacher spoke of finally feeling some sense of justice:

“Staff are relieved that the union has pressured EF into backtracking and finally following  government guidelines.  It’s a stain on their already poor reputation that they forced us to fight for this.”

Another teacher, employed in the Brighton branch of EF added: 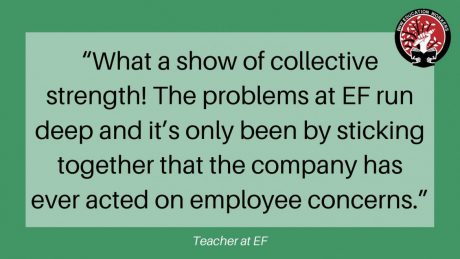 Earlier in the year, staff across the company secured back pay for unpaid health and safety training EF requires employees to undertake at the start of their employment.  On this point, the same London teacher added:

“The owner of EF is worth 6 billion dollars.  Yet I was on a week-to-week zero-hours contract with no paid preparation time.  When we learned the company wasn’t paying us for training, it was a step too far.  We went to the union who were there to hold the company to account.”

Sandra Llewelyn, a national officer in the union who was involved in supporting the affected staff offered this advice:

“Learn how pay works and check your payslip every week.  Most employers don’t understand payroll and unscrupulous ones, like EF, will actively seek to take advantage.  So be vigilant.”

EF Education First has over 52,000 employees in over 116 countries. The company is controlled by the Hult family with patriarch Bertil having an estimated net worth of over 6 billion US dollars. During the COVID crisis approximately half of UK staff were made redundant at the statutory minimum. Staff were not rehired, despite the government scheme allowing companies to do so and place staff back onto furlough