Update 29/09/2017: we now have confirmation the regional CNT of Catalonia and Balearic Islands has voted to join the call out for a general strike on Wednesday 3rd October. The other big radical union in the Iberian peninsula – the CGT – has also called out for a general strike, and various smaller alternative unions have joined.

The IWW supports the call out coming from sister unions that we have connections and have been working with. We invite ourmembers in the UK to support the general strike through solidarity actions in your own cities, wherever possible outside embassies and consulates (info below).

Spanish Embassy in the UK (London):  location and details here.

The International Solidarity Department has received and is happy to share this statement from the CNT Catalonia & Balearic Islands:

“The CNT local unions from Catalonia and the Balearic Islands publicly state our support for the self-determination of the Catalan people.

As anarcho-syndicalists, we don’t think that political reforms within a capitalist framework can reflect our desire for social transformation, a change that would place production and consumption means in workers’ hands. Because of this, our daily struggles do not focus on creating new states or backing parliamentary initiatives.

However, we can’t look the other way when regular people are being attacked and repressed by any state. A state that has, in this case, removed its mask and revealed itself as an authoritarian rule, the true heir of the Franco regime. This is something that could be glimpsed before through many instances, such as labour law reforms, bank bail-outs, cuts on health and education, mass evictions of out-of-work families…many of which were implemented by the Catalan government itself.

CNT Catalonia and the Balearic greet this spirit of disobedience against a dictatorial state, a discriminatory and fascist state, and want to assert our strongest denunciation of repression against workers and of those who carry it out.

The men and women in CNT will stand as one to defend their neighbours and townsfolks, as couldn´t be otherwise with an anarcho-syndicalist, and henceforth revolutionary, organisation.”

You can also view the original statement published here in Catalan, Spanish and English.

We have been working closely with the CNT for the last year or so and consider them fellow travellers in the radical unionism’ journey leading to the abolition of the wage system.

More news to follow on how to support the CNT internationally, keep posted. 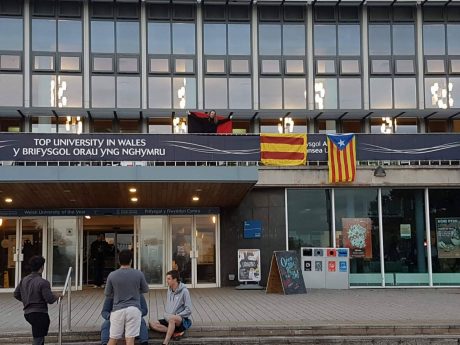