The so called “English Defence League” demo on Saturday 8th April 2017 was relocated from a previous location in the East Midlands to Birmingham city centre in an attempt to capitalise on the recent terrorist attack in London. The has been part of a series of marches around the UK, most recently in Edinburgh (Report Back) and London (Report Back) which have seen the largest mobilisation of militant anti fascist resistance for many years that left the neo-nazi knuckle heads cowering behind twice their number of riot police.

We can only assume that the EDL chose this particular date because they knew that the majority of anti-fa comrades were going to be down in Brighton on that day at the Physical Resistance Antifascist Festival. Sadly there is always going to be the odd occasion when this happens. We think the folks who were down at the festival deserved a well earned bit of recreation and relaxation after the amazing organising that’s been happening recently.

There was also a Birmingham City vs Derby County football match (2-1 to Derby on a tragic last minute goal if you were wondering) on the same day so perhaps the EDL thought they could scoop up some lost fans. At one point observers from the IWW were keeping an eye on a group of men chanting outside of the Shakespeare pub. They were on the corner of New Street surrounded by cops but we concluded they were just fans going through the usual macho away-game antics and causing a bit of a scene. We did however observe a few dodgy fash-types drinking in the pub later which shows how easily fascists can co-opt and integrate into fan communities.

As usual the EDL drifted into the city and straight to nearest pub to assemble. There, about 50 of them outside the Railway Pub, at the side of New Street, started hurling racist slurs at passers by and provoking a fair share of passing brummies telling them where to stick it. The police were pretty aggressive walking away anyone who lingered too long. Anyone who hurled abuse back at the fash was threatened with public order offences. 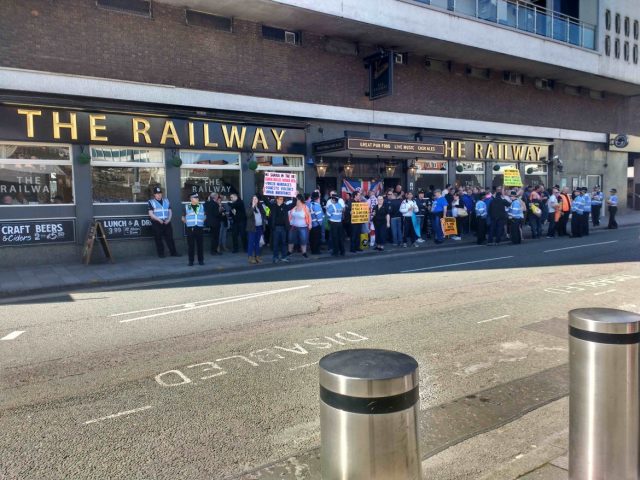 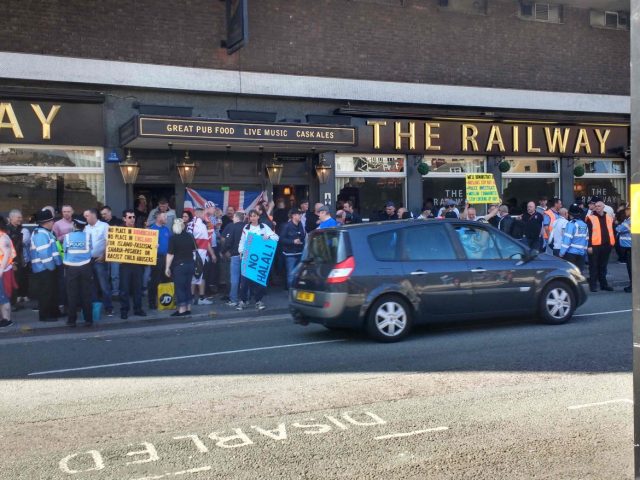 The EDL trickled in and then marched up to Centenary Square along the short planned route. Police seemed to rush them a little, something which the mostly old and overweight fascists didn’t really like. That’s a problem with a diet of beer and “British” food, It’s very stodgy and doesn’t do good for one’s health. The EDL reached their destination where their stage had been preassembled alongside requisite “port-a-loo” toilets. We can only hope that Birmingham City Council or the West Midlands Police weren’t picking up the bill for these facilities for our unwelcome guests. 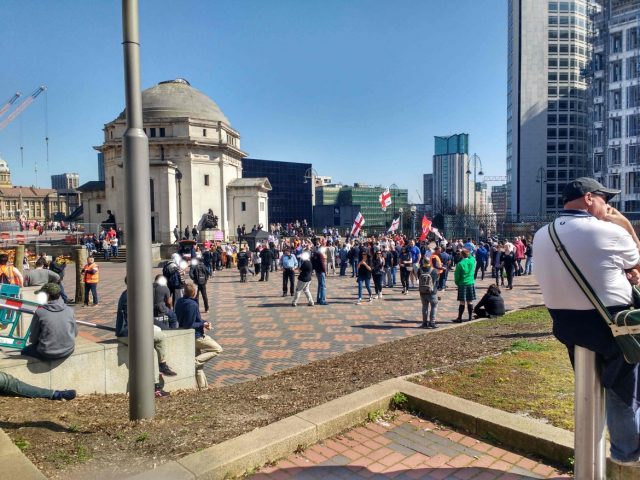 The Socialist Workers Party front “Stand Up To Racism” counter demo was located in Victoria Square. This is a good ten minute walk from any of the locations that the fascists frequented or their assembly point in Centenary Square. There was a few EDL spotters there also, not exactly subtle with your Nazi tattoos. 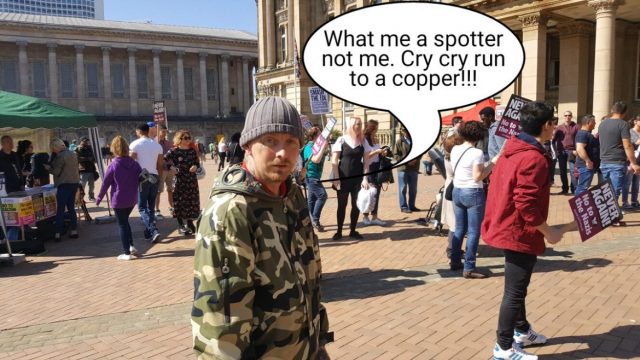 As usual the real resistance is down to the young people and primarily young people of colour. Because there was no cordon surrounding the fascists, we were able to move freely among the fash who were decked out in their gimpy branded EDL attire and comedic “knights templar” dress up costumes. A few scuffles broke out when passers by were provoked by these white racist men taking up space in our city. Seemingly the EDL think they’re so tough but it takes 40 of them to stand down a couple of young brummy guys pointing out the fact they are a bunch of scumbags.

Our love and thanks go out to the people who put their physical safety on the line to confront these idiots including one lone women, wearing a hijab who was able to disrupt the entire speech for about 20 minutes by telling them where to go (http://www.birminghammail.co.uk/news/midlands-news/watch-scuffle-breaks-out-edl-12866557, https://www.independent.co.uk/news/uk/home-news/edl-march-birmingham-muslim-woman-supporters-surrounded-islam-tolerance-hatred-racism-a7675656.html). The amazing photo from Saffiyah standing down EDL head goon Ian Crossland was taken as folks led by Saffiyah intervened to stand alongside our sister. Absolute hero!

The photo of Saffiyah (in the national press) has been picked up by the media and is an emotional and powerful symbol of the strength of the community we have built here in our city and the bravery of those who defend it. Ian Crossland later tried to reconcile his insecurities by bitching, whining and making threats on Facebook.

Real “tough guy” that one. I hope he knows the boy in his avatar is from the classic film Kes from left wing director Ken Loach (Kes DVD cover). Go watch Land and Freedom and get to know about some history, ya dick head.

The cops were pretty quick to drag away anyone causing too much of a disruption which resulted in the arrest of at least one anti fascist. Remember to keep a recommended lawyers number written on your arm for such an occasion (see https://greenandblackcross.org for more info).

We also saw one EDL shit get arrested for punching one of the brave women taking a stand and another kicking a women from behind who the cops didn’t nab. The brum mail blurred them both in their video (http://www.birminghammail.co.uk/news/midlands-news/watch-cowardly-attacks-behind-aimed-12872933) 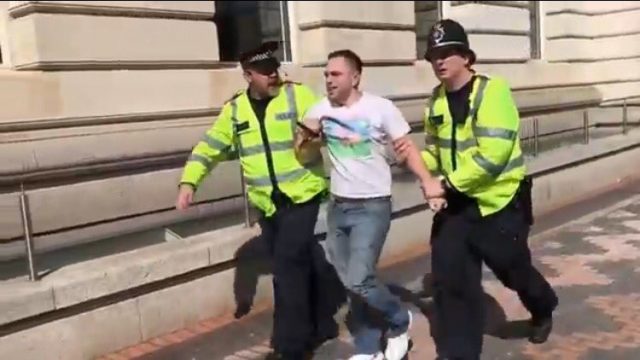 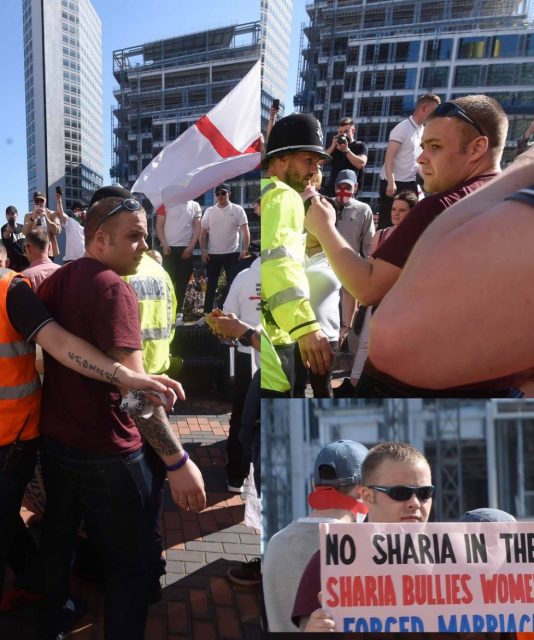 The fash were later herded back to the station and back to whence they came by police with little further incidents to mention. Sadly we confirmed reports that a white Range Rover with Union Jack bumper flags was driving around Digbeth close to Hurst Street and the LGBT Quarter and along Digbeth High Street, shouting abuse and throwing eggs at passers by and attempted to knock a passing cyclist off their bike. This was a worrying development and we patrolled the area for a while but didn’t see the vehicle in question.

All in all, a pretty poor showing for the EDL considering Birmingham is one of the most well connected cities in the country. We saw and heard lot of fascists from up north and you can see some familiar ugly mugs in the local paper’s photos: http://www.birminghammail.co.uk/news/midlands-news/gallery/edl-came-birmingham-protest-after-12867073.

As always the people of this wonderful city of ours stood firm in the face of fascist attempting to colonise our space. 0121 REPRESENT as always! Our message is clear: FASCISTS NOT WELCOME HERE OR ANYWHERE!