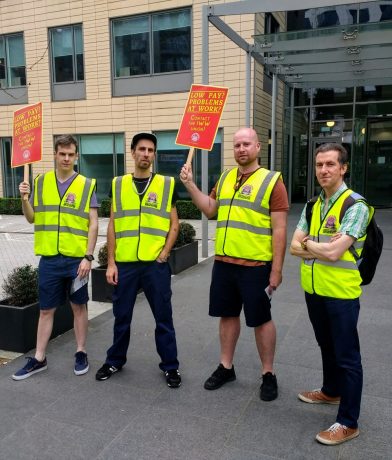 Today, IWW had a picket in front of the RBM premises in London to show solidarity with the IWW workers in Montreal in defense of the job and better working conditions.

No job losses at RBM! No union busting!

What ́s going on?

Red Bee Media is seeking multiples redundancies in the UK and outsourcing those jobs to the US and Canada where pay and conditions are worse than in the UK. RBM is attempting to prevent its North American workers from unionising. This is an attack on your conditions and it must be resisted.
The IWW is the union representing RBM workers in Montreal who are fighting for equal conditions with UK workers, union recognition and now their very jobs. Their fight is your fight. Equal conditions abroad will make your jobs in the UK more secure and will help prevent redundancies.
The Montreal subtitlers went public as an IWW shop on March 15th. In response, Louise Seddon, the head of production for all regions, flew out to Canada for crisis meetings. What followed was intimidation , ejections from the workplace and written warnings with false accusations. On April 11th, the entire workforce were made redundant – RBM had decided it was cheaper to close shop than to negotiate..
The IWW is responding with global pickets of RBM offices. It is coordinating solidarity action from the STC union representing RBM workers in Spain as well as the CFDT union representing RBM workers in France where workers have refused to take on work being redirected from the Montreal office. We are calling on UK workers to do the same and to voice their opposition to RBM’s actions in Montreal in the strongest possible terms.

We want to coordinate additional action between UK workers and those at other RBM sites around the world to give you a stronger hand in fighting redundancies. The panic displayed by management in response to the Montreal workers unionising shows how much RBM fears workers coming together to fight for better conditions. RBM know that if their employees stick together and take action, they can force concessions from management.

To find out more about the international fight with RBM management, how that effects redundancies in the UK and how the IWW can support you, get in touch at:
* london [at] iww [dot] org [dot] uk
* http://www.facebook.com/london.iww/ 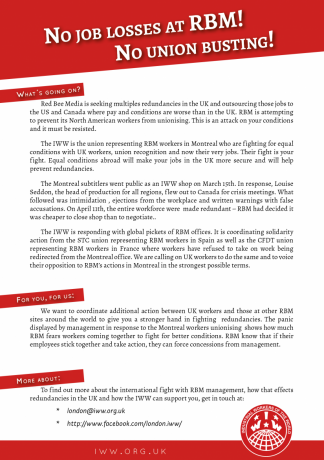