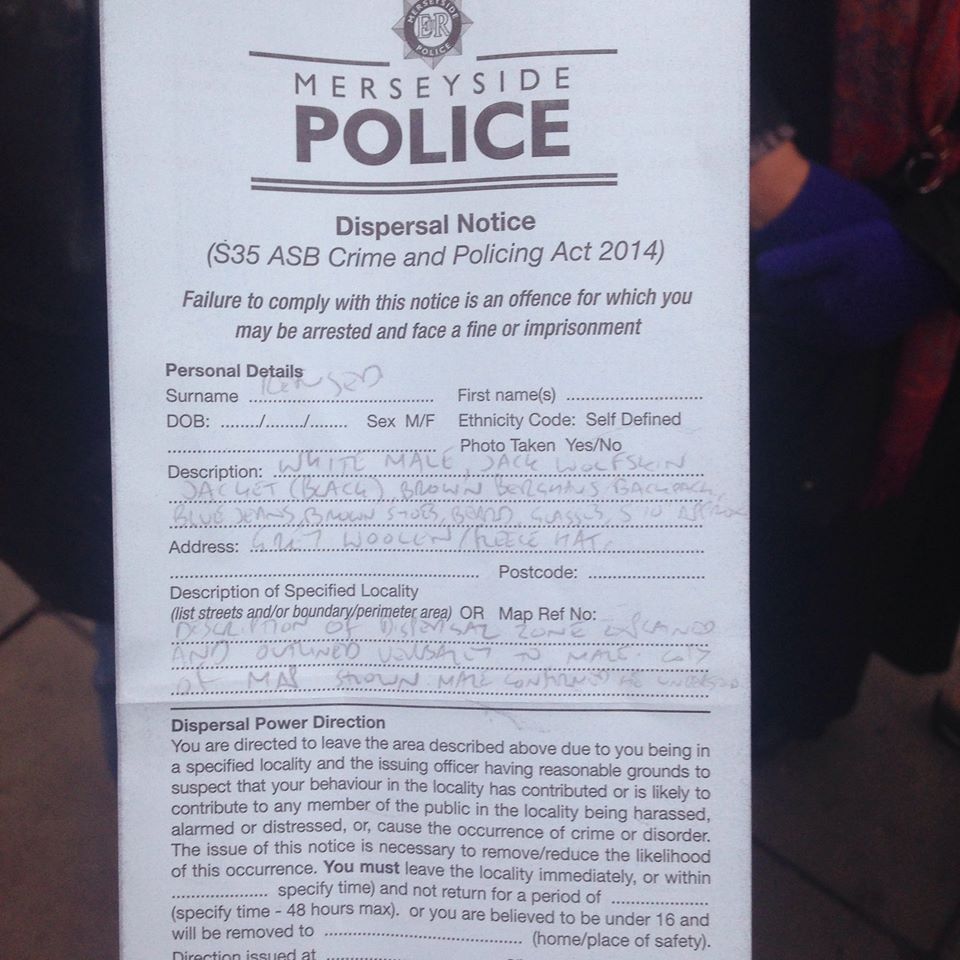 The Dispersal Notice this Saturday

Merseyside Police used this legislation against activists for the first time on Saturday 22nd November. People taking action with the Liverpool Rise For Palestine group were presented with a Dispersal Notice during their weekly protest against shops linked to support for the government and economy of Israel. This itself followed heavy repression of an anti-fur trade demonstration in the city the previous Saturday, when three protesters were arrested outside Harvey Nichols, and released on bail conditions banning them from the town centre.

This Saturday (29th), the activists who had gathered in Liverpool city centre were not actually intending to protest anything. In fact, they were deciding where to go for a drink when police officers came over to ask about their plans. When no real answer was given, the activists were given the Dispersal Notices, which banned them from large areas of the city centre until 6pm.

This developing pattern suggests that police are working with businesses in the area to suppress political expression during peak shopping times in the run-up to Christmas. While this is completely unacceptable in of itself, it also sets an extremely worrying precedent. Will Merseyside Police – and other forces around the country – use such a pretext into the new year? Undoubtedly they will try to.

Under the terms of the 2014 Anti-social Behaviour Crime and Policing Act, police are authorised to exclude a person or a group of people from a particular area for a period of up to 48 hours. They can only do this if “satisfied on reasonable grounds that the use of those powers in the locality during that period may be necessary for the purpose of removing or reducing the likelihood of (a) members of the public in the locality being harassed, alarmed or distressed, or (b) the occurrence in the locality of crime or disorder.”

As people commented on Saturday, this legislation appears to mean that cops can trample on democratic rights at will, since they are not required to present any proof that harassment or crime is intended. One officer farcically commented that activists may have “polystyrene balls”, and these “may cause distress”. However, when invited to search for these mysterious balls, he declined.

We therefore believe that the officer “of at least the rank of inspector” who issued the Dispersal Notice themselves broke the law. In fact, it appears Merseyside Police saw the 2014 Act as merely the best cover for their real agenda – protecting and serving the rich and powerful. 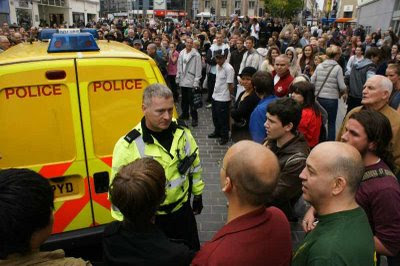 The people of Liverpool standing up for democratic rights in 2008

This level of police repression of Liverpool activists has arguably not been seen since the ‘capital of culture’ days of 2007/08, when increasingly regular state harassment of campaigners saw a broad umbrella group come together to oppose the police. On 11th October 2008, designated ‘Freedom Not Fear day’, ten different organisations held stalls on Church Street. Police tried to seize literature and people, but the general public became enraged, and blocked their vans for over an hour. Stunned by this, Merseyside Police had adopted a much more ‘hands off’ approach until recently.

Though Liverpool IWW are yet to experience any repression of our new group’s activities, we hope a diverse group of activists will once again stand up to the state’s attacks. The only freedom we have is the freedom we struggle to win and defend! An injury to one is an injury to all!