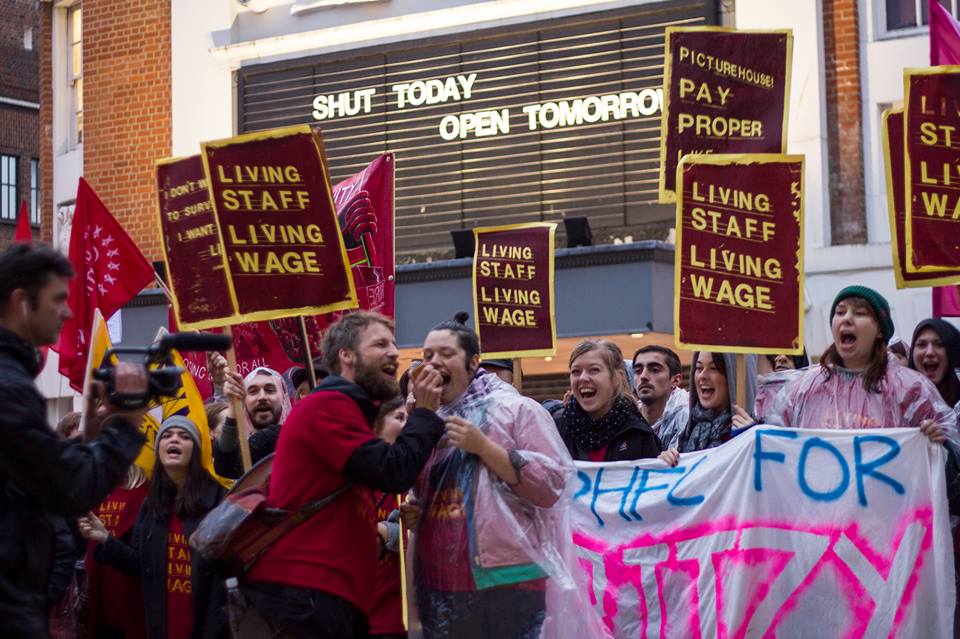 Liverpool IWW are calling for solidarity with workers at a Picturehouse cinema, who are striking and campaigning for a London Living Wage. The Brixton Ritzy workers are calling for a national boycott of Picturehouse cinemas, until the chain agrees to pay them enough to get by and live decently. However, as Liverpool IWW, we would like this struggle to spread across the country, and we appeal to all staff in FACT and Picturehouse – paid and unpaid – to join our campaign. Currently, almost all Picturehouse staff across the country are living below the poverty line.

The IWW is a union for all workers, no matter what their industry, including the unemployed. FACT – which hosts the Picturehouse in Liverpool – recently made eleven workers redundant, and replaced them with unpaid volunteers. This was a sickening attack on the local working class, and shocked people around the country. Currently, according to FACT’s own figures, out of 125 people working for them, 76 are not being paid for it – 61% of the total. Without ‘volunteers’ – often unemployed young people trying to improve their CVs – FACT simply could not open.

FACT is a so-called ‘charity’ being run in the interests of the people based on the top floor who do the hiring and firing, who make money off the unpaid labour of desperate young people. Picturehouse is a massive corporation, which made £31 million in profits last year, yet claims it can’t afford to keep the people who made them that money out of poverty.

Liverpool IWW aims to organise all workers in poverty into one big union, and that seems to be everyone who keeps the building we are picketing ticking over. We appeal to cinemagoers not to cross the Ritzy workers’ picket line, and refuse to give Picturehouse’s bosses any more money til they make an acceptable offer. And we appeal to workers in the FACT building to join us, and help build resistance here in Liverpool. Email us: liverpool [at] iww [dot] org [dot] uk, like us on Facebook, or follow us on Twitter.

Liverpool IWW will be holding a picket at FACT on Saturday, 28th June at 6pm.