As members of the IWW, committed to industrial, not craft, unionism, motivated by syndicalist principles, we are active in UCU as dual-carders seeking workers’ control of industry as we aim to build a new society in the shell of the old. With this in mind, we would urge you to vote for Jo Grady number 1, with Jo McNeill number 2, in order to secure a member-led union.

As participants in the inaugural summit of the new Post-16 Education Network within our union, there has been much discussion of the current General Secretary election in UCU. Many of us are dual-carders, and a number of us have also been, or are currently, activists or branch officers within UCU.

We were asked by some network members to offer a recommendation on behalf of the Network to dual-carders in UCU working in post-16 education. The main recommendation must be to encourage dual-carders simply to vote: UCU General Secretary elections typically have appalling turnout, and this is a vital opportunity to the shape the future of our workplaces.

As members of the IWW, committed to industrial, not craft, unionism, motivated by syndicalist principles, we are active in UCU as dual-carders seeking workers’ control of industry 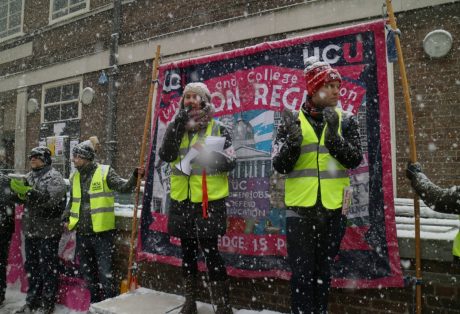 as we aim to build a new society in the shell of the old. With this in mind, we would urge UCU members to vote for Jo Grady number 1, with Jo McNeill number 2, in order to secure a member-led union.

Dr Grady is not associated with the traditional union factions, and is not beholden to them. She is not associated with the partisan and sectarian politics which has traditionally dominated UCU elections. She is an industrial relations and pensions expert, and in addition has co-authored a number of articles on the history of syndicalism in Gibraltar and Spain. She is a genuine rank and file candidate, committed to democratising UCU and opening up spaces for the membership to lead the union. Whilst rank and filism always has its limits, this is a significant opportunity for us. Grady has been instrumental in the course of the past two years to opening up new spaces for activist engagement due to her high-profile activism in the USS dispute. Her manifesto includes specified commitments to democratising the union. She was recently elected to the National Executive Committee. We urge you to give her your first preference. Her website is here.

Jo McNeill is a longstanding member of UCU Left and former candidate for General Secretary, President of the University of Liverpool UCU branch and is also a member of the National Executive Committee. She has been a national negotiator for UCU in the past and is an experienced and committed activist. With this in mind we urge you to give her your second preference. Her website is here.

Matt Waddup, by contrast, is the bureaucracy’s candidate, is not a member of UCU and has never worked in the sector, being a career trade union official. Last year he participated in staff walkouts at UCU Congress (the union’s sovereign policy-making body) which shut Congress down, in order to frustrate motions – passed democratically by branches – critical of the union leadership which had been ruled in order by the Congress Business Committee. In our view, it is imperative that Waddup, whose candidacy is antithetical to everything the IWW stands for, must not win. His website is here.

This recommendation is offered with humility as we are merely members of the Post-16 Education Network who have been asked for our opinion. In our view, it is vital if our dual-carding strategy is to be effective in our sector that UCU is member-led. With this in mind, we recommend voting Grady number 1 and McNeill number 2, but regardless we would urge you to vote for a candidate who is a UCU member rather than a member of staff.

P.S. For more on developments in UCU over the last year and the movement to put members at the centre of the union, have a listen to this interview with a UCU activist from the New Syndicalist blog.