In June 2021, a Bournemounth-based English language teacher came to the IWW’s TEFL Workers’ Union concerned that they’d been on bogus fixed-term contracts during their employment at the Anglo-Continental School of English. The fellow worker had read about the union’s successful campaign to eliminate fixed-term contracts at major ELT chain, Kaplan, and asked if the union might be able to support them as well.

The local Dorset branch of the IWW, in partnership with union reps and organisers in London and Brighton, quickly decided there was a case to answer for: Anglo-Continental has been employing teachers on rolling fixed-term contracts for years, in effect denying them full employment rights that accrue after two years of continuous service. 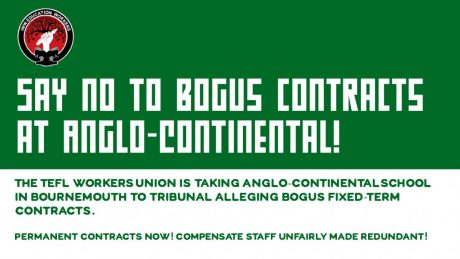 This fellow worker, for example, started work at Anglo-Continental on a fixed-term contract in 2010. This ended when the school closed for its December break, with the fellow worker returning to the school in January and the contract being extended for one year.

This pattern was repeated over the next eight years. Our member worked in the same job at the same site for at least 11 months each year with 4 weeks paid holiday, being upgraded to co-ordinator in the summer months. The HR manager even admitted they had to break the contract annually to deny them full employment rights. Often when workers requested a holiday they were given a P45.

After four years, according to UK employment law, fixed-term workers become a permanent employee by default. However, Anglo-Continental never informed their staff of this fact  (a breach of its contractual duty of “trust and confidence”).

In March 2020, the school shut and the worker at the centre of the dispute was put on furlough until 31st July. Their contract was then terminated on the grounds there was no work; in law this is simply ‘dismissal by reason of redundancy’. They were not consulted over redundancy selection nor told of their entitlement to compensation (another contractual breach).

Had the union been contacted at the time we would of course have taken it to tribunal. Unfortunately there are strict limits on when a case can be brought. But the IWW believes if a sum is owed to a fellow worker, it remains owed until it is paid.

In March 2021, our member returned to the school with a new contract which ran until they took a week off on 4th June after which it was again renewed.

In July 2021, the national TEFL Workers’ Union wrote to Anglo-Continental claiming compensation and passed the casework to the Dorset branch. Within days, the fellow worker was fired. Dismissals for trade union activity and ‘whistle-blowing’ are automatically unfair so no need to quibble over length of service. We’ve now exhausted the grievance procedure and ACAS conciliation so we are, at last, taking the matter to an employment tribunal.

We have sight of internal e-mails that show Anglo-continental as a dysfunctional organisation with no clear demarcation of responsibility. Five members of staff, including senior managers, were overruled on a whim of their boss Guido Shillig, who we are told “doesn’t like unionists”.

The IWW will not rest until our members are treated with dignity and respect on the job. If you teach English as a foreign language, join the TEFL union –  and join the fight to demand an end to fixed-term contracts at Anglo-Continental and across the entire ELT industry.