The Saturday before the last working week of the year, the teachers at Delfin School were emailed by the director and asked to confirm our attendance at a meeting the following Monday. Alarm bells were ringing that weekend as everybody feared the worst. We had been looking forward to the two- week Christmas/New Year break.

At the meeting on the Monday, we were advised that the school was downsizing and moving premises and that there would be redundancies. The policy was to be ‘last in, first out’, but we would have the opportunity to put forward, and discuss ideas to avoid being made redundant at a follow up meeting that Thursday. It was difficult to know what we were going to suggest on the Thursday, because the school had been far from honest in the information they’d given us, eg, how many redundancies there’d be, where the school was moving to ( they said they didn’t know ) and projected student numbers in 2020.

Thursday came, and we weren’t given much more info in that meeting. Just that we’d know around lunch time on Friday who was going to become out of work. All of this was causing a great deal of stress, and we were still teaching, trying to keep the forthcoming dismay in the background. On the Friday we learnt that the criteria for redundancies had changed from last in, first out to ‘skills’. This being unclear as each member of the teaching team was a skilled individual who had given their all to supplying engaging lessons at the school. We waited all day for news that Friday. The school was busy packing up its materials, clearly with a destination in mind. In fact, management came into classes to announce the new location they were moving to, but still no news for the teachers.

It was around half past six that Friday evening, that one by one, the school systematically gave redundancy notice to each of the teachers. That evening would have been the beginning of a much earned and needed break for the teachers. Instead we found through social media contact that they’d got rid of us all.

When the school opened its doors again in the new year, we discovered that classes were running with teachers from an agency.

Christmas 2019 was cancelled for a dedicated team of teachers at Delfin School. 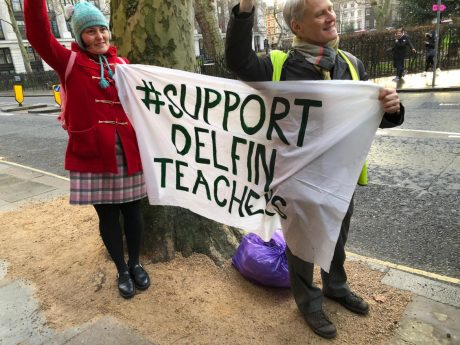