“in the sweat of thy face shalt thou eat bread, till thou return unto the ground; for out of it wast thou taken:  for dust thou art, and unto dust shalt thou return” 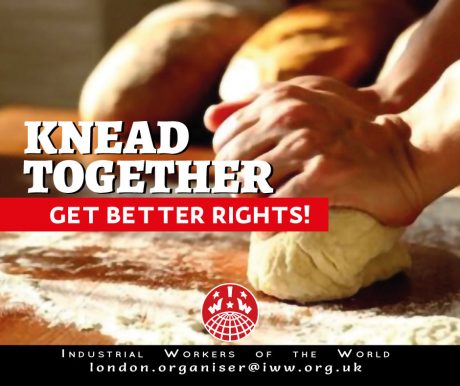 When a comrade at a Blackbird Bakery cafe initially approached us, it seemed like their problems were clear: management had taken away their hot staff meals, and they wanted them back. We approached this at first by finding out more about the company and the way they treated their employees, it quickly became clear that we were dealing with management who held their workers in contempt. One manager even said that workers were more efficient when they were paid less! When workers asked for their disciplinary and grievance procedures, they weren’t provided. When a worker raised their grievance, they were suspended immediately and told to come in for a formal meeting in two days’ time. We had a fight on our hands, and the workers at Blackbird Bakery were more than up to the challenge.

We had a last-minute meeting with the workers to discuss strategy for the grievance/disciplinary hearing Meanwhile we heard that the company summarily demoted one manager and suspended another (for not opening the kitchen when their staff had been suspended). Our grievance was heard collectively, our fellow worker’s suspension was lifted that same day and the company apologised for its rash actions.

Then of course, work was disrupted by COVID-19. Contrary to Government advice the cafe stayed open, calling itself an essential service, until a concerted flurry of union-organised social media campaigning with the help of the One Big Union quickly persuaded the management to back down and close, with workers gaining remuneration through the job retention scheme. Shortly after this victory, we learned that the grievance we’d filed was completely successful: the company conceding that hot meals are common practice at one branch and reinstating them for all workers in that branch.

Now all that is left is to use this time to deepen our strategy and education – and we are confident that the fight will expand and continue, as it always will, and we will win greater concessions from management for the working conditions of all the workers in Blackbird Bakery.