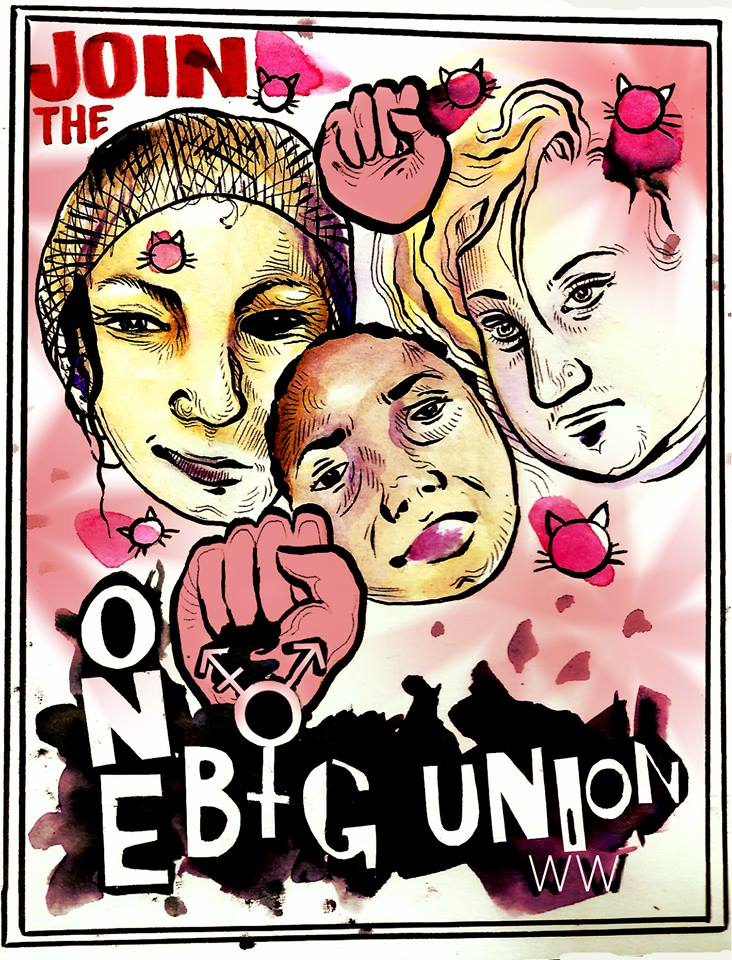 This article is about my personal experience of being involved in the IWW, what I’ve gained from it, and why I think it’s important for me as a womyn to be in it. Because it’s based on my personal experience, I can’t help using language that is relevant to me and that I am comfortable with. I am fully aware of the existence of different languages relating to gender in particular, but I find that geographically, culturally and socially they don’t relate to my individual experience. By not using them, I am not trying to alienate or offend anyone who feels differently, but, like I said, this is about my personal experience. I hope that whatever your background and history you can find something to relate to and be inspired by in this article.

A womyn’s place is in her union…so she can learn to kick ass!

All around the world girls and young women are predominantly still being brought up being told to be “a good girl”. Be pretty. Be cute. Be slightly shy and modest. Be polite. Be complacent! Anything else is ‘bad’, ‘naughty’, or worse. I have the luck of already being someone who, as my very polite British partner would put it, “doesn’t suffer fools gladly”, or, as I would put it, in the glorious words of Bette Midler, “I’m not a bitch, I have a low bullshit tolerance”.

Despite being a Wobbly for a while, it is only in the last few years I have become a lot more actively involved in my branch and in the wider region. It was personal experience that brought about this change. A couple of years ago I was working in a very small voluntary organisation where I had one of my worst work experiences ever (but not the last, unfortunately!). My manager was essentially a bully who, having founded and run the organisation for years, acted like its Supreme Leader. I had countless problems with many ridiculously basic work rights, such as having a written contract. I decided to confront this person and submitted a grievance with the support of a fellow worker from my branch. It was an incredibly stressful experience, made even more troubling by the fact that the bully manager was a womyn like myself, and she self-identified as being being politically and socially aware, and a member of oppressed communities. Despite the sleepless nights and the stress, I decided to go ahead with it and kick ass. It certainly wasn’t the first time I kicked ass in my life – I do have a low tolerance to bullshit after all! – but it was probably the first time that the action of kicking ass was a conscious, political one. I didn’t just react impulsively to this person’s bullshit, I made the conscious decision that whatever the consequences I would stand up for my rights and speak up, as a Wobbly, as a womyn, and as a human being.

This event was significant to my membership in the union. I finally experienced personally and understood what it means to be in a radical grassroots union that gives you the confidence and strength to speak up for yourself AND KICK ASS! This is relevant to any human being in the world, but I felt it was especially significant to me, as one of those womyn who was brought up being told to be a good girl and causing major dismay and despair when she decided she wasn’t going to be one. These events were deeply significant in increasing my level of involvement within the branch. Once your eyes have been opened to the Wobbly Way, you can never go back!

A womyn’s place in her union…so she can feel empowered, take up space and support other people to do the same!

Having the personal experience of a workplace grievance has empowered me on different levels. Firstly, I have gained practical knowledge of what actually happens during a grievance, how to submit it, what to expect, what language is used. Secondly, I am now fully aware of the emotional impact that problems in the workplace have on people’s individual lives. As soon as the nightmare was over, the first thing I wanted to do was to complete the Union Representative training, so I could become a rep myself and support people in similar situations in their workplaces. Once again, I rejected the patriarchal voices in my head telling me to get back on the right track and be a good girl, and made the conscious decision I would carry on being a Bad Ass. Not only that, I would support other people to feel as empowered as I had felt.

I didn’t know when I finished the union rep training that I would go even further in the Wobbly Bad Ass Way, and become a trainer myself. To be honest with you, I probably didn’t even think until a year ago or so that I would actually enjoy delivering training courses. If someone had told me I would be in Bristol’s main square one Sunday afternoon speaking in a microphone giving a workshop about Wobbly organising tactics, I would have laughed in their faces and told them “Naaa, that’s not me”. The patriarchal bastards in my head wouldn’t have believed that I could have actually done that, and even enjoyed it!

A womyn’s place is in her union…so she can find her own place in the struggle!

So, here I am now writing this article. It has taken a few years to find my niche in the IWW. I joined as soon as the Bristol Branch started because I wanted to be part of a radical grassroots union that reflected my political beliefs, but even so, it has taken me a while to find my voice within it, and to understand which struggle within it I felt closer to and could participate in. I have now been Comms Officer for my branch for over a year. I’m a trained rep and an accredited trainer, I have delivered a few training course, and I have spent the last year outreaching to European migrant workers by translating materials in other languages and meeting with lots of individuals and groups in Bristol from those communities. Not bad, huh? I still find it hard sometimes to ignore the patriarchal shitty voices in my head telling me I’m being really cocky and really I should shut up more, and be a bit more modest, and shy, and polite, and pretty, and, most of all, I should try harder to be a good girl…but most of the time I am quite proud to tell you I can tell those voices to f*** off because being in the IWW has given me pride in being a human being, a womyn, a Wobbly and, most importantly, a Bad Ass.