We are writing to express our support for the INDEPENDENT WORKERS’ UNION OF GREAT BRITAIN’s (IWGB) “Back in House” campaign. We urge you to agree to their demands that outsourced workers – including cleaners, post room workers, security officers, receptionists and porters – be made in-house, that the university implement pay rises which were promised six years ago and that it abolish zero-hours contracts at the university. 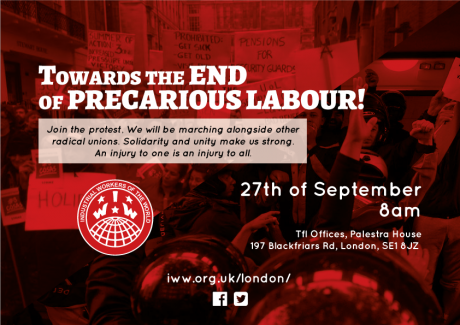 It is a cruel irony that the institution with which Nelson Mandela did his correspondence degree in law while imprisoned would have such discriminatory employment practices, with the mostly migrant and BAME outsourced workforce granted fewer rights and benefits than the mostly white British in-house staff.

As you are aware, outsourced staff receive worse pension, holiday and sick pay entitlements than their colleagues that are employed directly
by the university. But more importantly, by working through facilities management companies they are more likely to suffer from abuses such
as illegal deduction of wages, bullying and discrimination.

Furthermore, the university’s outsourced security officers, porters and post room staff have for months been demanding that you implement the pay rises the university promised six years ago when the London Living Wage was introduced for cleaning staff. While increasing the wage of the lowest-paid staff at the university was a welcome move, it has resulted in the stagnation of the wages of other classes of workers, whose wages now are either the same or nearly the same as that of cleaners. It might come as a surprise to you, but the London Living Wage is supposed to act as a floor, not a ceiling.

Despite their repeated offers to sit down and negotiate, you and the rest of your management team have chosen to ignore them.

The excuse used by the university – that this is the purview of the contractor Cordant – is just further evidence of why all its staff has to be brought in-house, since for far too long the university has been hiding behind its contractors.

So we urge you to listen and agree to the demands of the people that keep the university running smoothly. They are as much part of the university as you, the teachers and the students, and deserve the same respect.